When local governments in Australia imposed another series of lockdowns earlier this summer, many Americans were alarmed by Australian governments' “authoritarian streak lurking beneath the surface.” The Atlantic even ran a piece titled “Australia Traded Away Too Much Liberty: How long can a democracy maintain emergency restrictions and still call itself a free country.”

Public polling in Australia, however, showed that lockdowns were in fact quite popular: In a poll conducted around August 31 (a month into the lockdown), 58% of Aussies said lockdowns should “continue until a substantial proportion of children are fully vaccinated.” Another poll conducted two weeks later showed that 53% expressed concern that the prime minister was “advocating easing restrictions without paying enough attention to hospital capacity.”

I find it surprising (and even a bit amusing) that two countries similar in language, population density, levels of economic development, and political institutions had a gulf of misunderstanding between them. Aussies had to compose and share viral tweets to “provide essential context” and give an “Australia 101” for Americans. The New York Times' Sydney bureau chief responded to The Atlantic article with a piece titled “Has Covid Cost Australia Its Love for Freedom? Most Australians are willing to make these sacrifices in pursuit of a collective freedom from fear of the virus.”

Again, the World Values Survey comes to the rescue. It asked precisely this question in its latest wave:

Most people consider both freedom and security to be important, but if you had to choose between them, which one would you consider more important?

Respondents were given a binary choice, and I plot the country mean on the x-axis. To add another relevant dimension to our analysis, I plot on the y-axis each country’s mean level of confidence in its central government.1 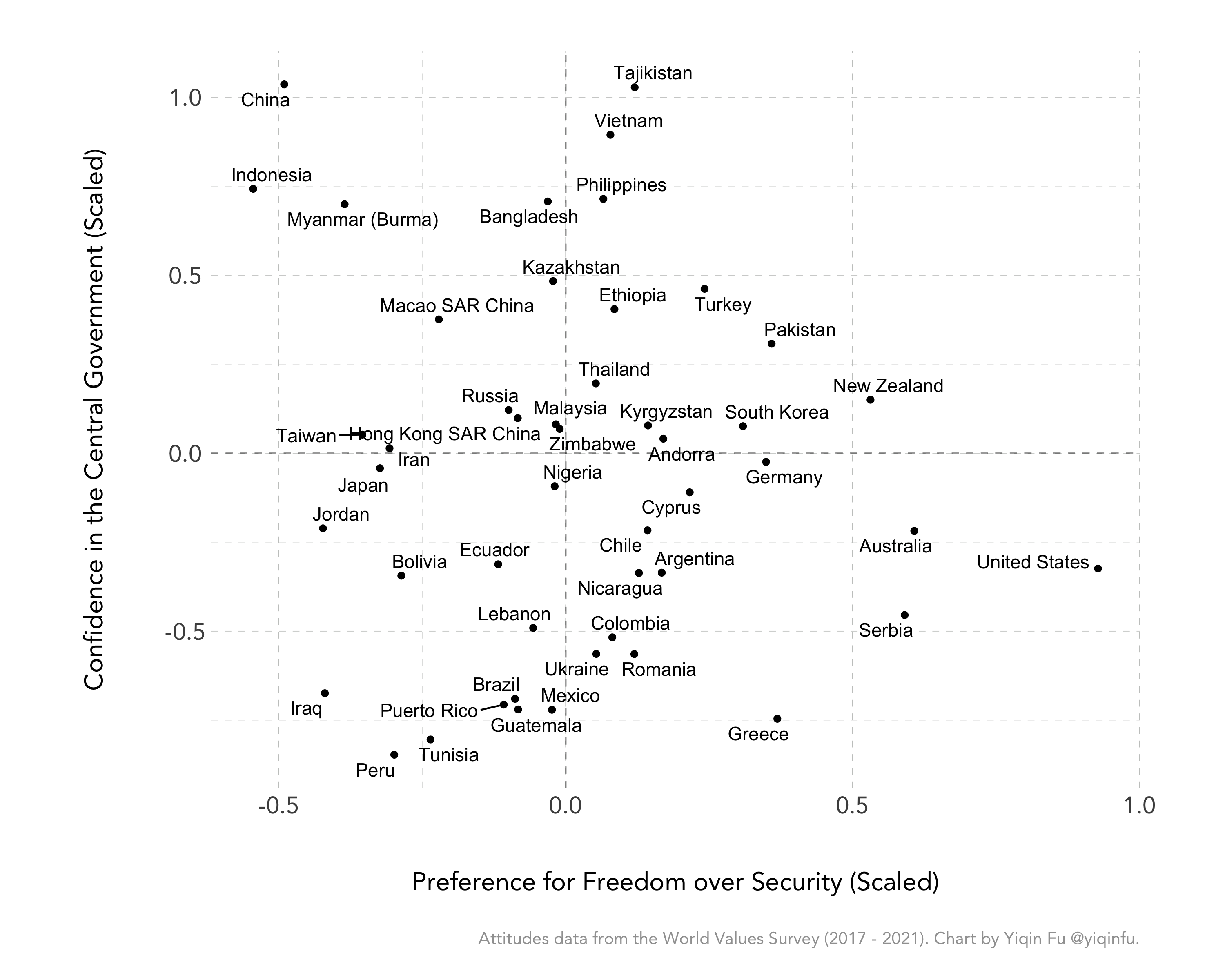 As shown above, Americans do value freedom more than Australians and trust their central government a bit less.2 The difference between the two countries, though, is tiny (0-0.2 SD) on both dimensions. If we compare China and the U.S., which sit on the opposite ends of the freedom-or-security spectrum, we get a shocking graph like this: 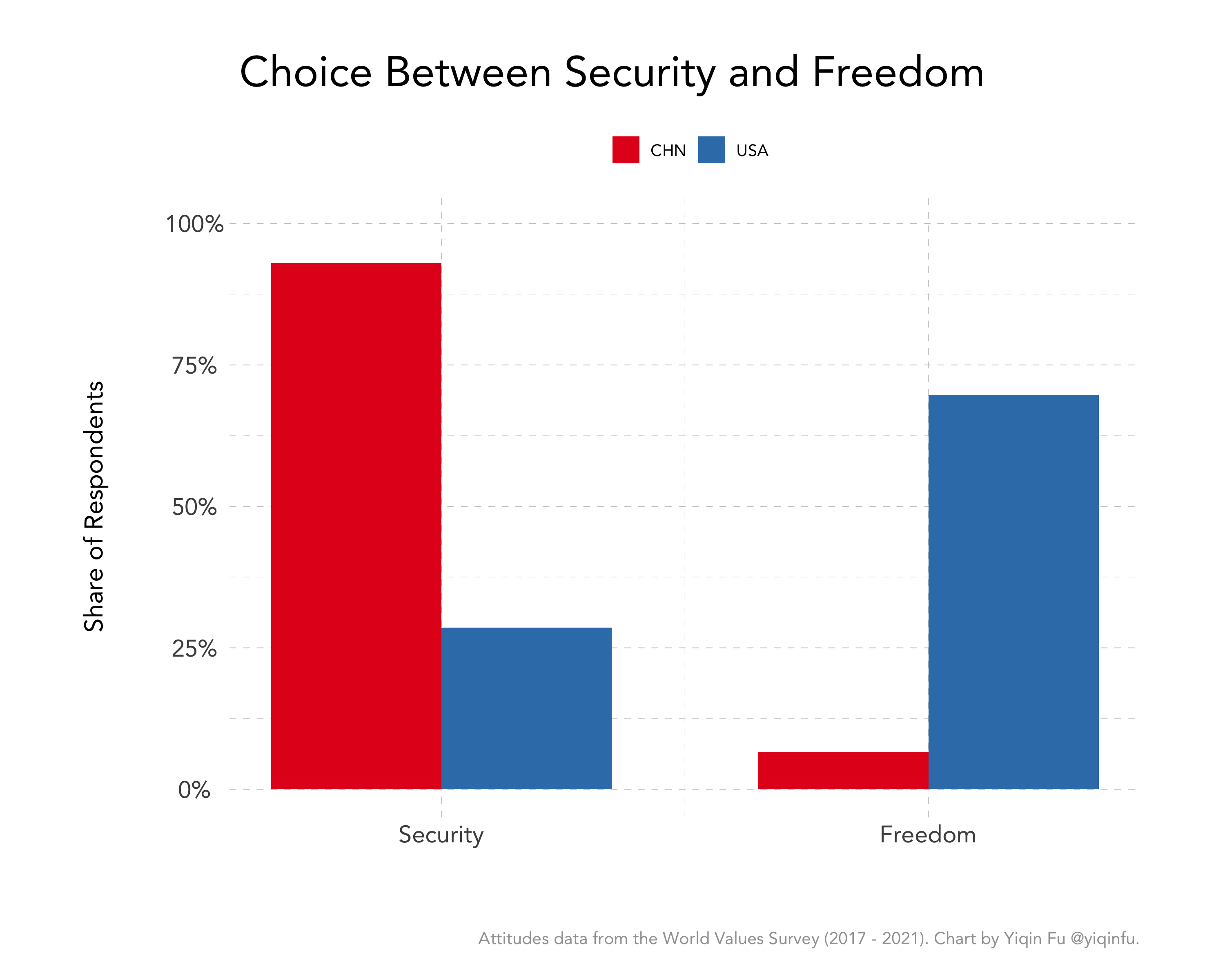 A whopping 71% of Americans chose freedom over security, whereas only 7% of Chinese people did.3

Given the sharp divide between the two countries, you may wonder whether institutions and/or development shape culture. There’s a huge academic literature on this topic, but for now, we can check whether today’s attitudes correlate with today’s institutions at the aggregate level. 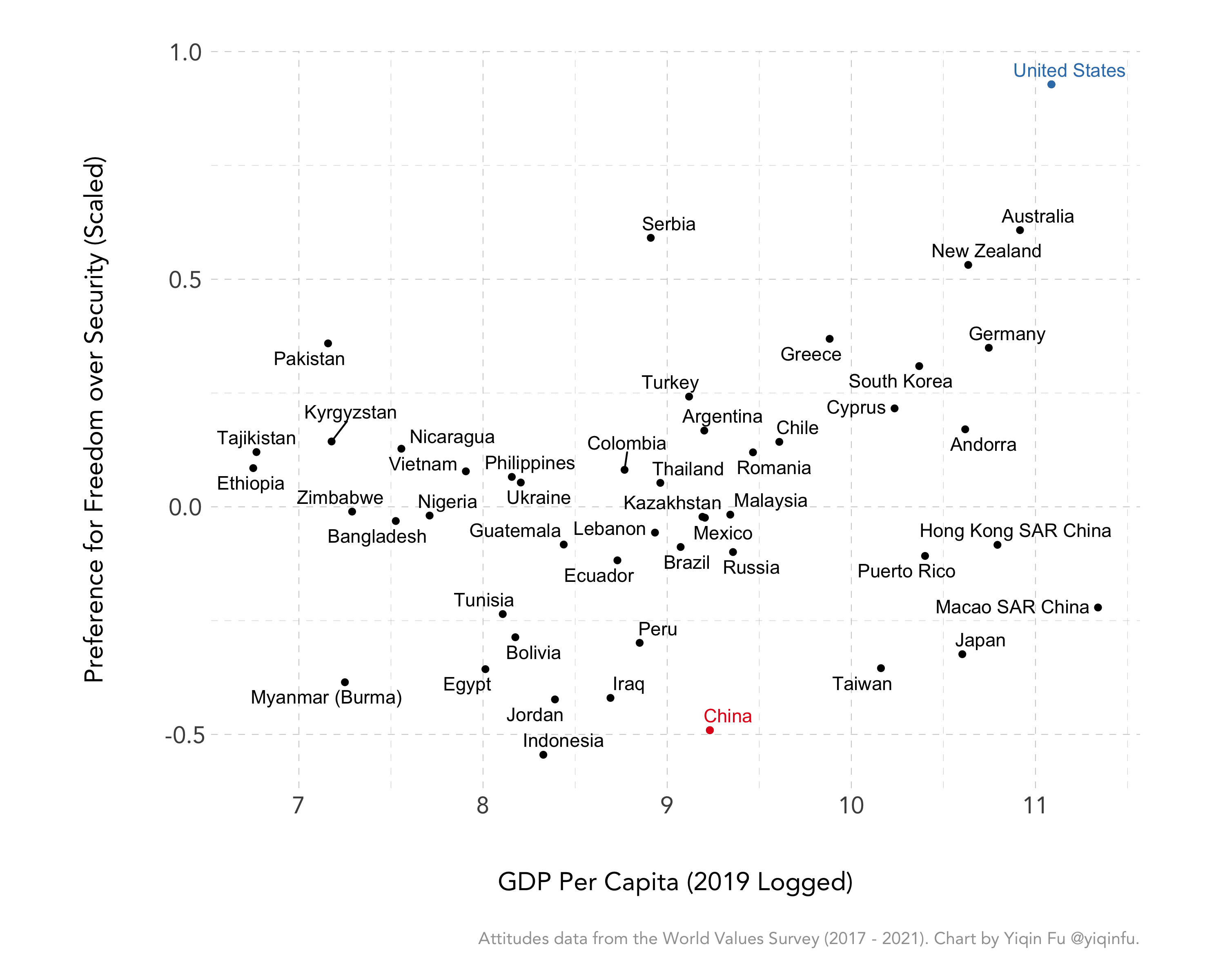 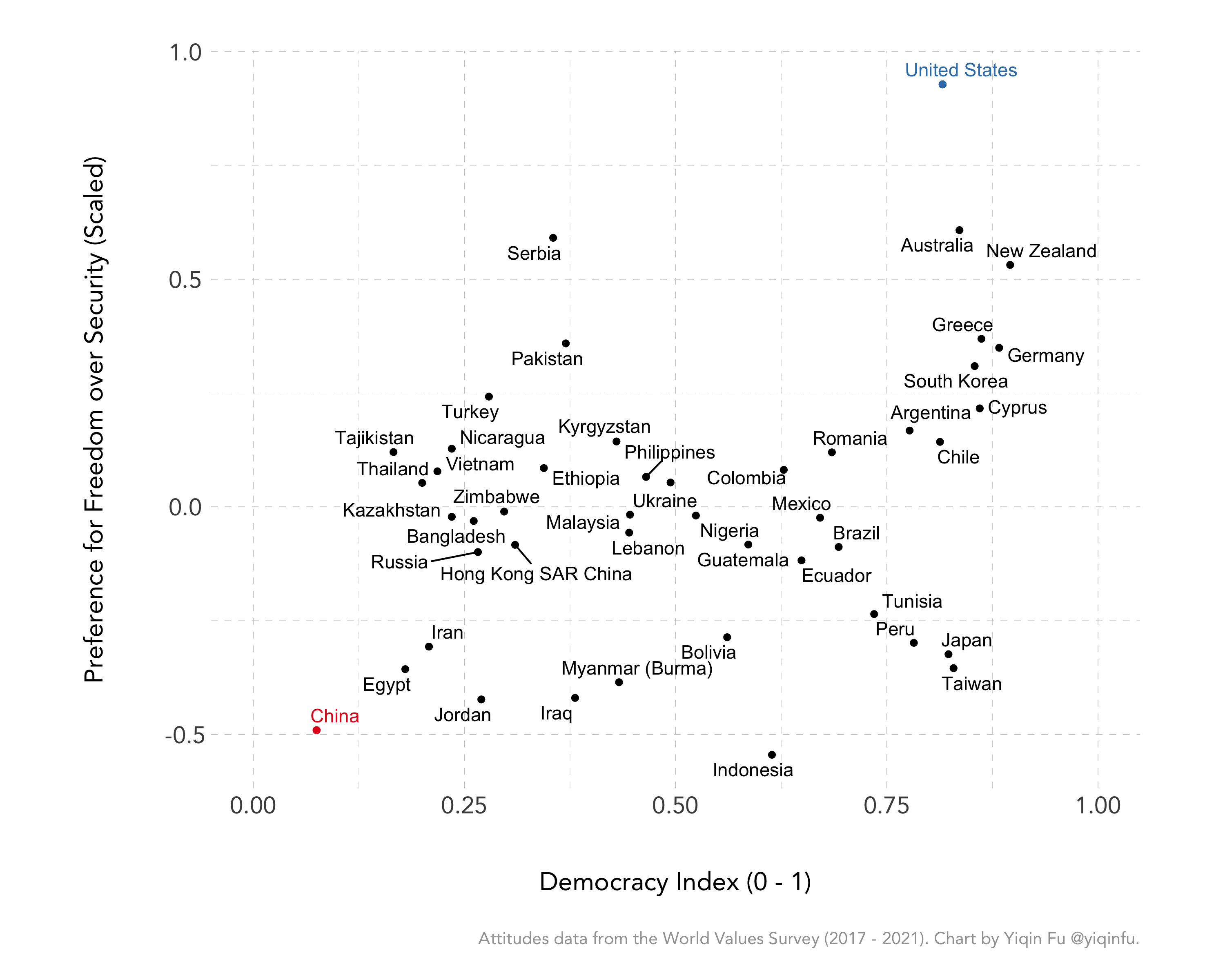 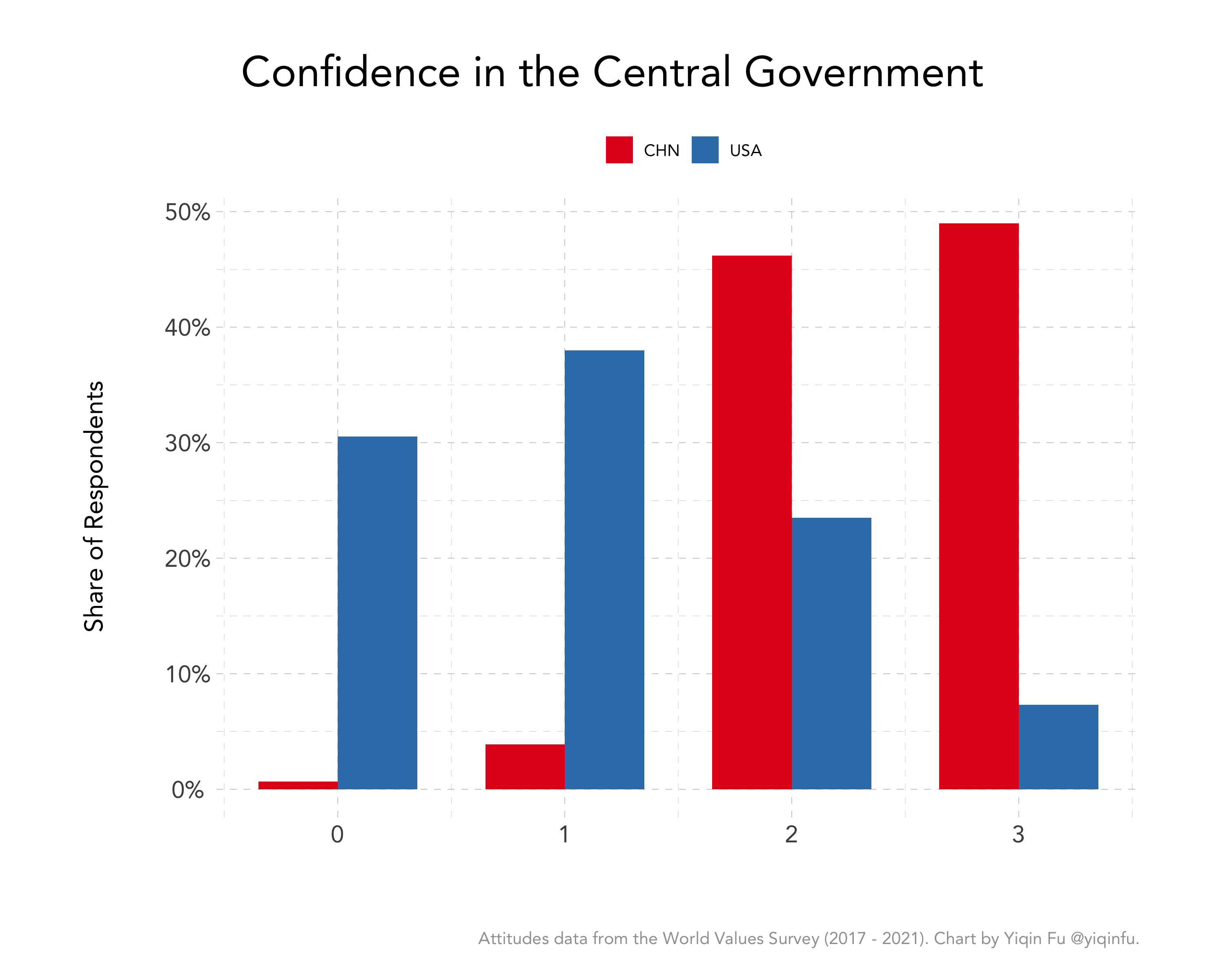 You may raise the objection that a sizable number of Chinese respondents falsified their preferences – they claimed to have a great deal of confidence in the central government but actually thought otherwise. Researchers have tried very hard to get around the preference falsification problem, and the consensus is that the central government genuinely enjoys a high level of trust. (Most in-person surveys of urban and/or rural residents find the mean level of confidence to be an 8 out of 10; the web surveys4 I’ve administered in 2021 say it is an 8.5 out of 10; conservative estimates are around 7.)