The United Nations Security Council (UNSC), the only U.N. body authorized to issue binding decisions, consists of five permanent members (China, France, Russia, the U.K., and the U.S.) and ten “rotating” ones elected each year.1

The UNSC holds anywhere between 200 to 300 meetings a year to discuss and vote on pressing multilateral issues, each member country typically represented by one person. All statements made by country representatives during open meetings are transcribed and posted on the U.N.’s website.

In the process of gathering and cleaning the UNSC meeting records for a separate project, I realized that the dataset could be used to study women’s representation at one of the world’s most powerful political bodies.

By compiling the more than 5,0002 meeting records available since 1994, we can get a sense of women’s representation in the foreign policy arena by country and over time.

How often is the U.S. represented by a woman at the Security Council? The answer is “more than half of the time” if we restrict our analysis to the past ten years and “a little less than half of the time” for the whole period of our analysis (1994 to 2018). Those familiar with the American foreign service probably would not be surprised, given that the past five U.N. ambassadors have all been women (Nikki Haley, Michele Sison, Samantha Power, Rosemary DiCarlo, and Susan Rice), not to mention Madeleine Albright, who went on to become the country’s first female secretary of state. 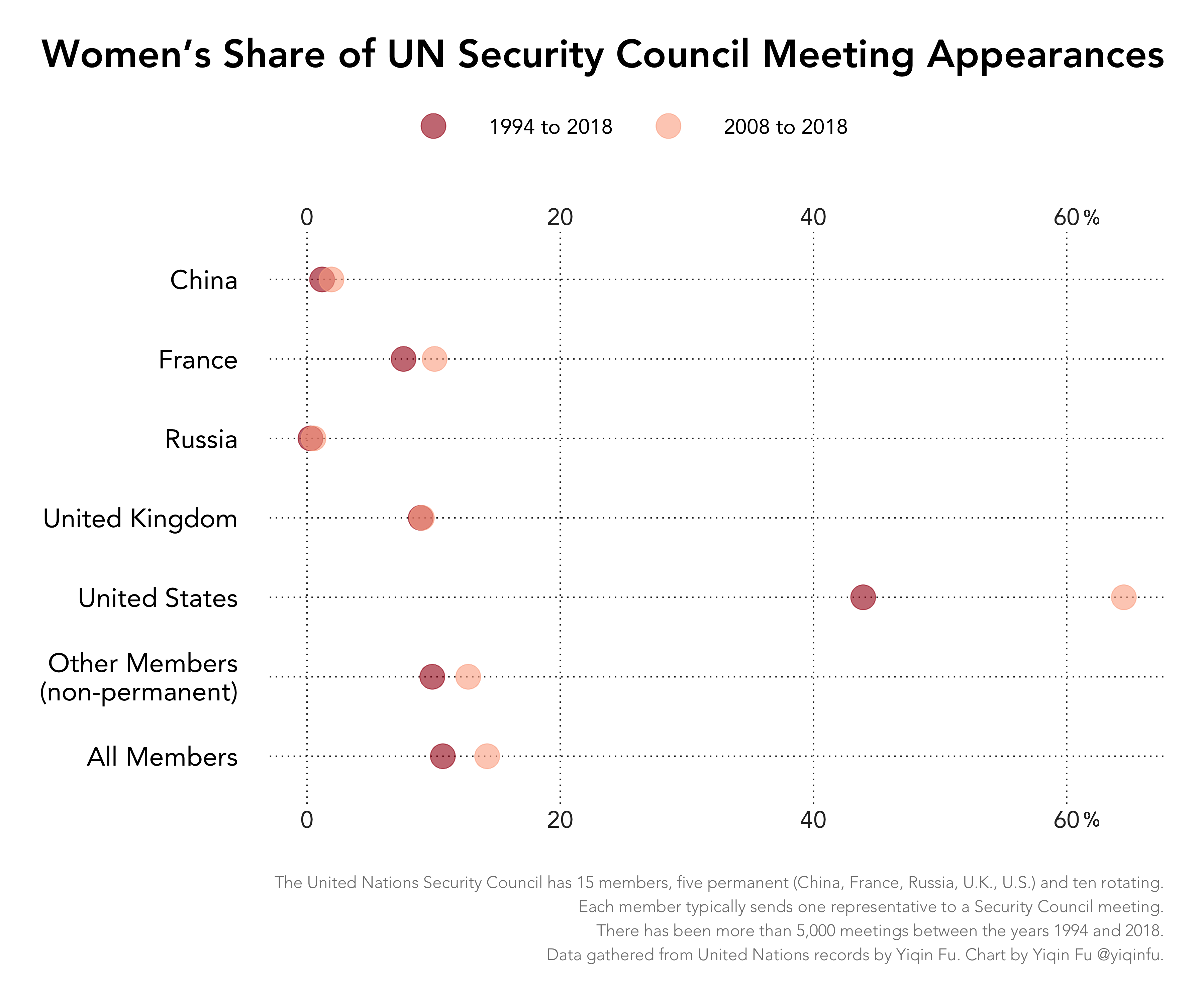 The more unexpected finding is probably the dismal numbers for France and the U.K., both of whom sent female representatives to Security Council meetings around 10% of the time, below the average for all Security Council members. This gender imbalance remains even after we restrict our analysis to the past ten years.

China’s and Russia’s figures are around 1% and 0% respectively. I do not know enough about Russia’s foreign service to make a prediction, but I am hopeful that China’s numbers will improve. China’s Ministry of Foreign Affairs has promoted quite a few women to senior positions over the years, and female students make up 70% to 80% of the student body at various Beijing and Shanghai universities specialized in training diplomats. At the end of the day, a figure such as 1% or 0% should not be hard to improve upon.

Countries other than the five permanent members have made too few appearances to be analyzed individually. Thus, we group them in the category “Other Members.”

After grouping by country, we can look at the makeup of individual meetings – what percentage of Security Council meetings are attended only by men? 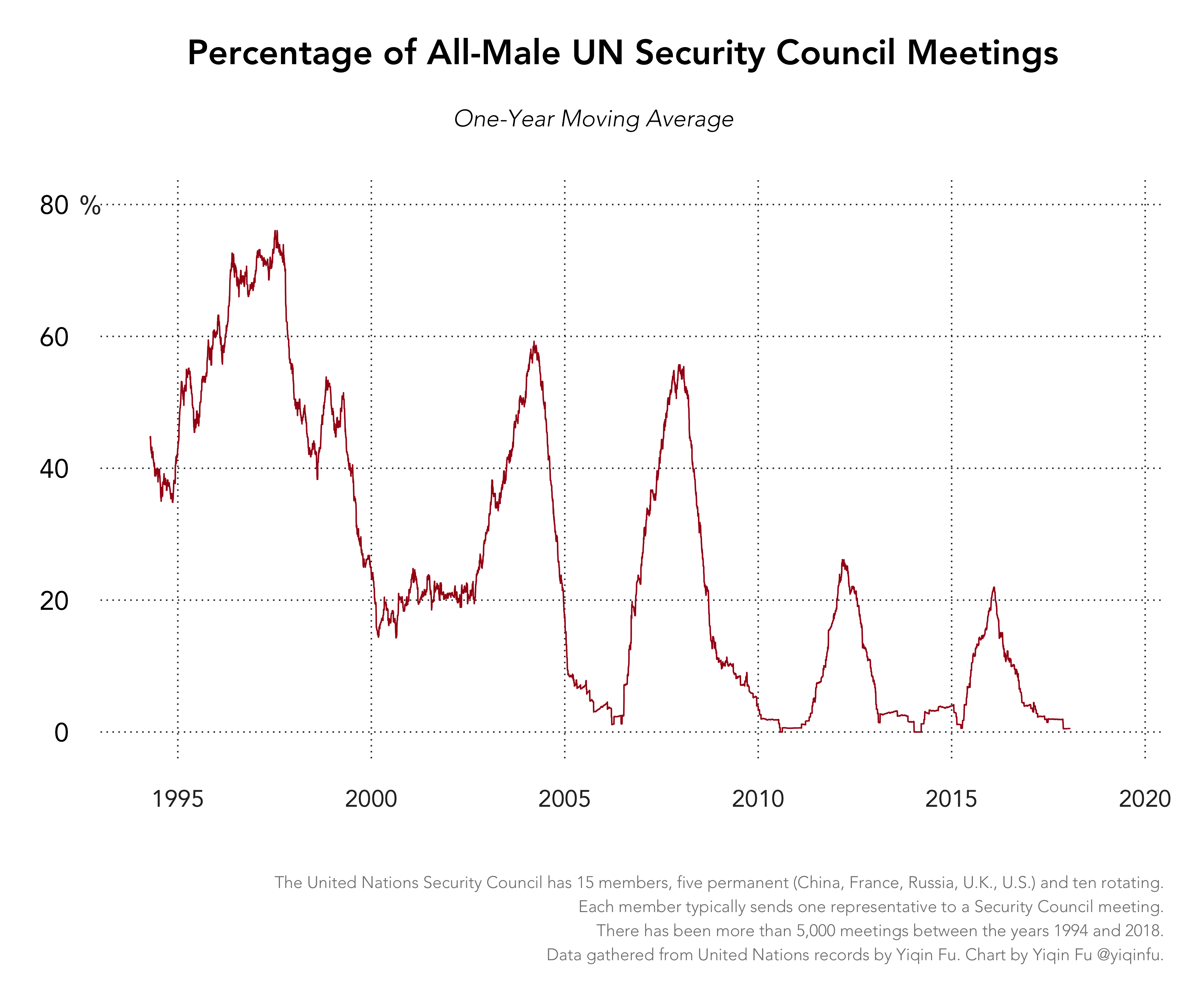 Given that there are 15 seats on the Security Council, having at least one woman should not be a difficult condition to meet. However, all-male meetings seem to be the norm in the 1990s and became extinct only in recent years.

Have there been more women at Security Council meetings over time? The answer is a resounding yes, although women still make up around 20% of the attendees. Interestingly, the 20% figure is also the median level of female representation in parliament around the world. 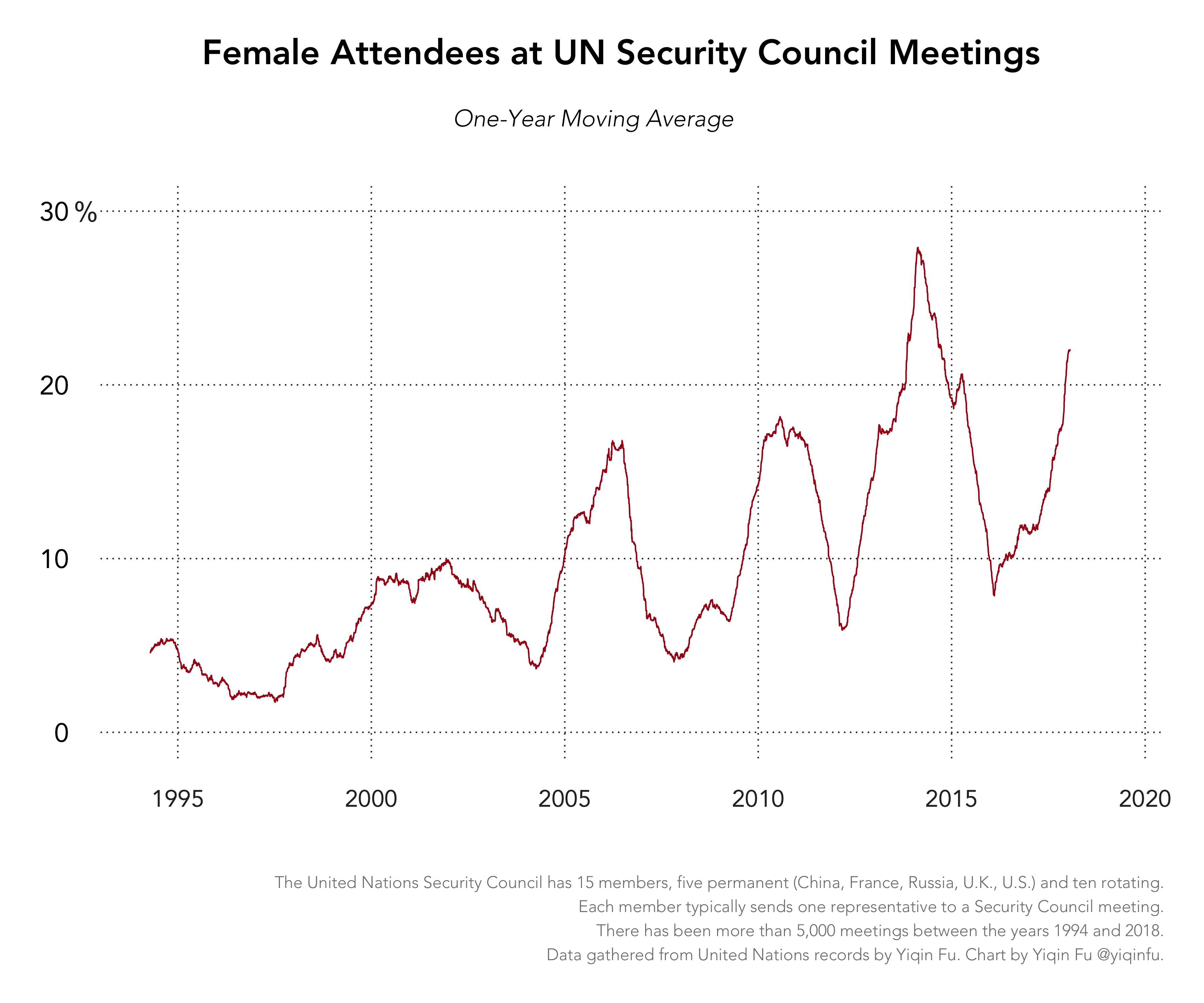 Hopefully by the time I update this analysis in 20 or 30 years' time, “20%” will not be the ceiling anymore, either in national legislatures or at the United Nations.