Much has been said about China leapfrogging ahead of the West in mobile payments and other mobile-first technologies. However, the downside to skipping the PC stage (and hence the open web) is often overlooked. Below, I highlight two unintended consequences of jumping directly to a mobile-first environment: 1) disincentives for creating knowledge, and 2) barriers to building weak ties.

Writing on the Internet can be broadly categorized into two types:

Take two of my blog posts as an example. The post comparing different Chinese-English translation services has garnered 30k views as of May 2021, but 2/3 of them occurred after a year of publication. Similarly, half of the traffic to the post visualizing countries' UN voting patterns came a year after publication. My tweets, on other hand, are probably only ever read the moment I hit “send.” 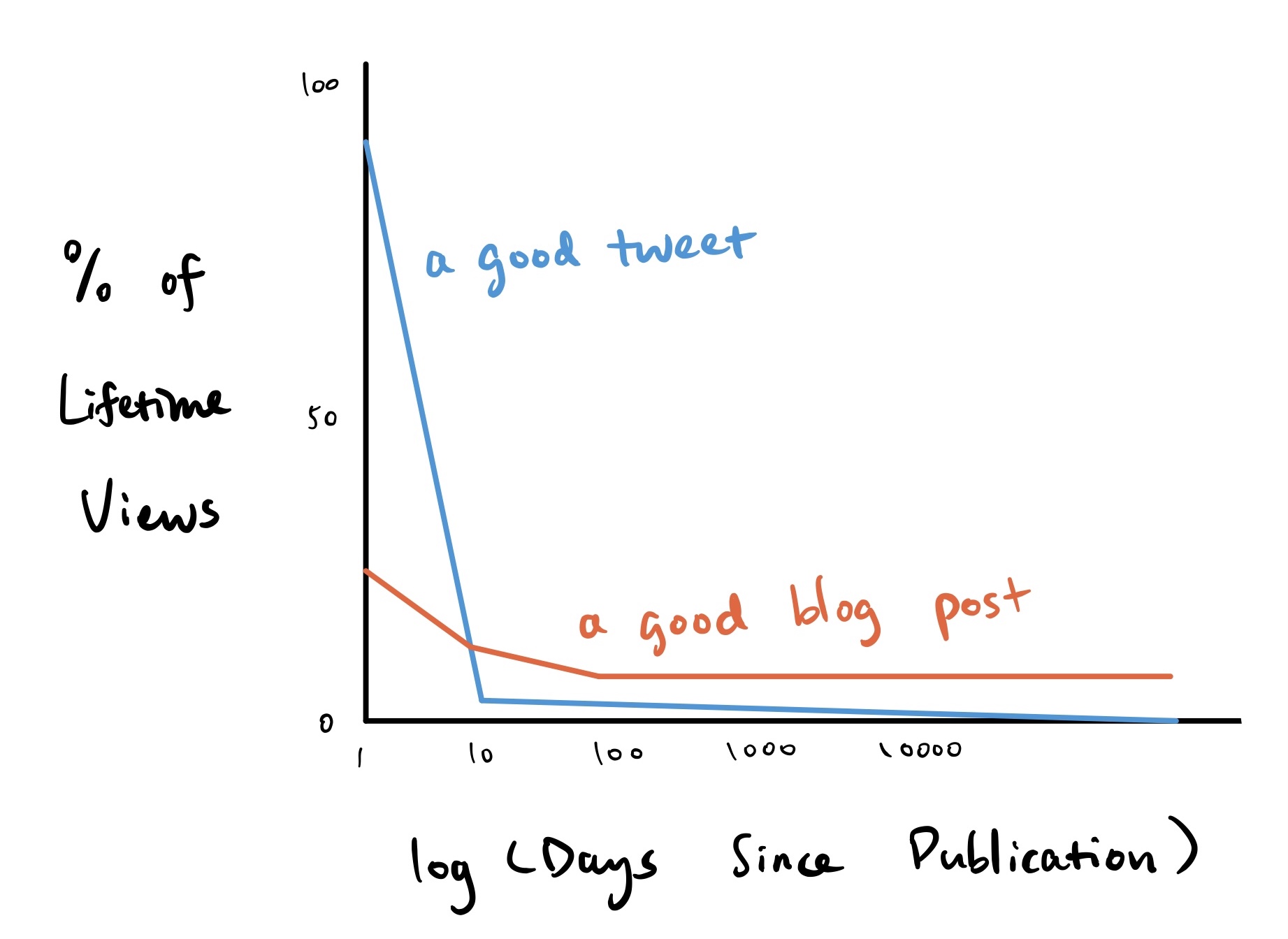 As much as people in the English-language world lament the decline of blogging, there is still the infrastructure and the reward system that support writing of the more reflective kind. A WordPress blog takes seconds to set up, and, more importantly, search engine indexing allows for content discovery – Writers know that their long half-life work will be read and that they are not competing for eyeballs alongside the quick takes.

The Chinese Internet, however, is the polar opposite. Search engines are practically nonexistent, and people read primarily by scrolling through social media timelines rather than visiting web pages with URLs at the top.

One might blame the censorship apparatus for handicapping Chinese search engines, but I’d argue that the dearth of long half-life writing is mostly the consequence of China jumping directly to mobile and the mobile-first Internet companies (rationally) creating walled gardens around content.

In the English-speaking world, consumers from the open web era demanded portals that listed web pages, and Google flourished as an index of everything there was to see online. But in a mobile-first environment, the gateway to information became the few “super-apps,” which naturally erected walls around their content because they didn’t need a search engine to direct traffic to their apps. The invention of timelines (especially the algorithmic ones) further reduced consumer demand for search, as passively scrolling took much less effort than actively typing or clicking.

In China, the clear trend towards mobile drove start-ups to focus exclusively on mobile development, and content platforms that had legacy desktop versions further crippled their desktop products to increase mobile adoption. In the end, we get a fragmented information system where everything is trapped in an app and nothing can be “rediscovered.” 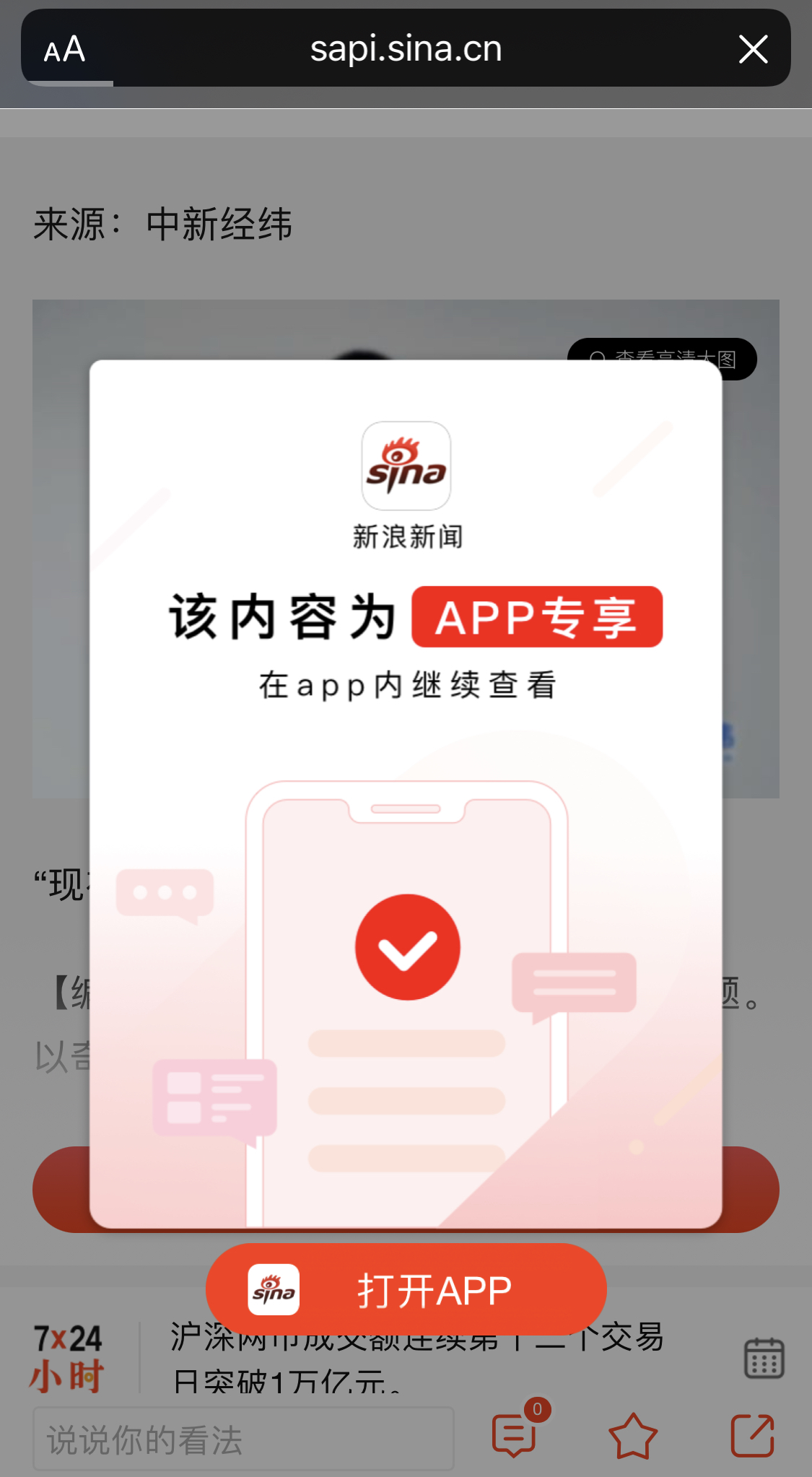 Take WeChat as an example. It is home to the vast majority of China’s original writing, and yet:

Search engine indexing is key to content discovery in the knowledge creation domain, but in a mobile-first world, it is extremely difficult to pull content across the walled gardens, whether or not there is a profit incentive to do so.

Again, the issue here is not censorship. Had China relaxed its speech restrictions, a search start-up would’ve faced the same level of resistance from content platforms when trying to index their content, and content platforms would’ve been equally reluctant to create their own search engines, as they could serve ads and profit without a functional search engine.

Google is without a doubt the best search engine today for Chinese-language content. (And it does not censor results.) Yet if you search Chinese keywords today, you frequently end up on pages that require you to download an app to view their content, or you fail to find anything, because that WeChat article your friend was talking about is not indexed by Google.

The system’s disincentives for knowledge creation cannot be overstated: If your writing “disappears” after a day, why invest the time to write at all? Stated a different way: if you know your words are only read within the first few hours of publication, what kind of words are you incentivized to put down?

My Chinese social media posts reach 100k to 200k people a day, but I chose to write this piece in English because the chance it would get rediscovered by a future reader was much greater on the English-language Internet. What, then, about people much more knowledgeable than me who want to share their insight? In an information system that has only tweets, how do we get experts to write blog posts, and how do we discover and rediscover their writing?

China and the U.S. are entering an era of intense competition. I can’t help but wonder to what extent the seemingly simple existence of a functional search engine – again, a fortunate legacy of the desktop-based open web, not the intentional, public-minded design of American businesses or policymakers – would give the U.S. an edge in knowledge creation and dissemination. It is striking how little substantive content I come across on the Chinese-language Internet in 2021, and the reason is most certainly not a lack of talent.

My lingering questions: 1) What policies and products would encourage more reflective writing in the Chinese-language world? Forcing the content platforms to allow indexing would be one. 2) Would a search engine exist in the counterfactual world where the U.S. went directly to mobile? How and where would people write long half-life articles? 3) The information ecosystem of other developing countries – Does Google’s domination encourage blogging even though most people own only mobile devices?

Another downside to skipping desktop is that weak ties built around emails are never formed.

I don’t have data on Chinese employees' modes of communication, but I wouldn’t be surprised if 90% of work communication is done over instant messaging. Multinational firms still use email, although when I asked on Chinese social media, my readers complained that emails often went unread. It seems like in the Chinese workplace, instant messaging still reigns supreme.

We all dread work emails in the West, but email is superior to instant messaging on two fronts: 1) Emails allow for “threads,” i.e. issue-based discussions; 2) Emails make it possible for strangers to connect (i.e. “cold-emailing”).

In China, the first issue has been or is going to be solved by Slack-like enterprise software such as ByteDance’s Lark (Feishu) or Alibaba’s DingTalk (Dingding) – Rather than arguing with 20 coworkers about three separate issues all in the same chat, people can subscribe to different channels. However, the second advantage of email (i.e. weak ties) remains elusive.

In the West, cold-emailing is common among professionals, especially when one wants to find a job or a client. However, since China never went through the desktop era when employees communicated via email, it is only possible to build connections with others after you have met in person (and added each other on instant messaging). Slack-like software is no rescue, because unlike email, it does not allow cross-organization communication based on simple guesses of others' usernames.

Most of my professional contacts in the West have been built via email, and I’d speculate that the same is true (and increasingly so) for everyone reading this post. The inability to cold-email in China – there’s not even a word for “cold-emailing” or doing anything “cold” – must have prevented many seller-buyer, investor-entrepreneur, and mentor-mentee relationships from forming.