As a casual football (soccer) fan who works five timezones away from Moscow, I am not going to stay up late for all of the 2018 Russia World Cup’s group-stage matches. Instead, I want to pick the more exciting ones to watch. Preferably,

Below is the full ranking of all 48 group-stage matches, and I will explain the criteria in more detail below. The team highlighted in blue is the betting markets’ favorite to win. The time is given in GMT+8, and for “Tuesday 2 am” matches, I write “Monday 26:00.” 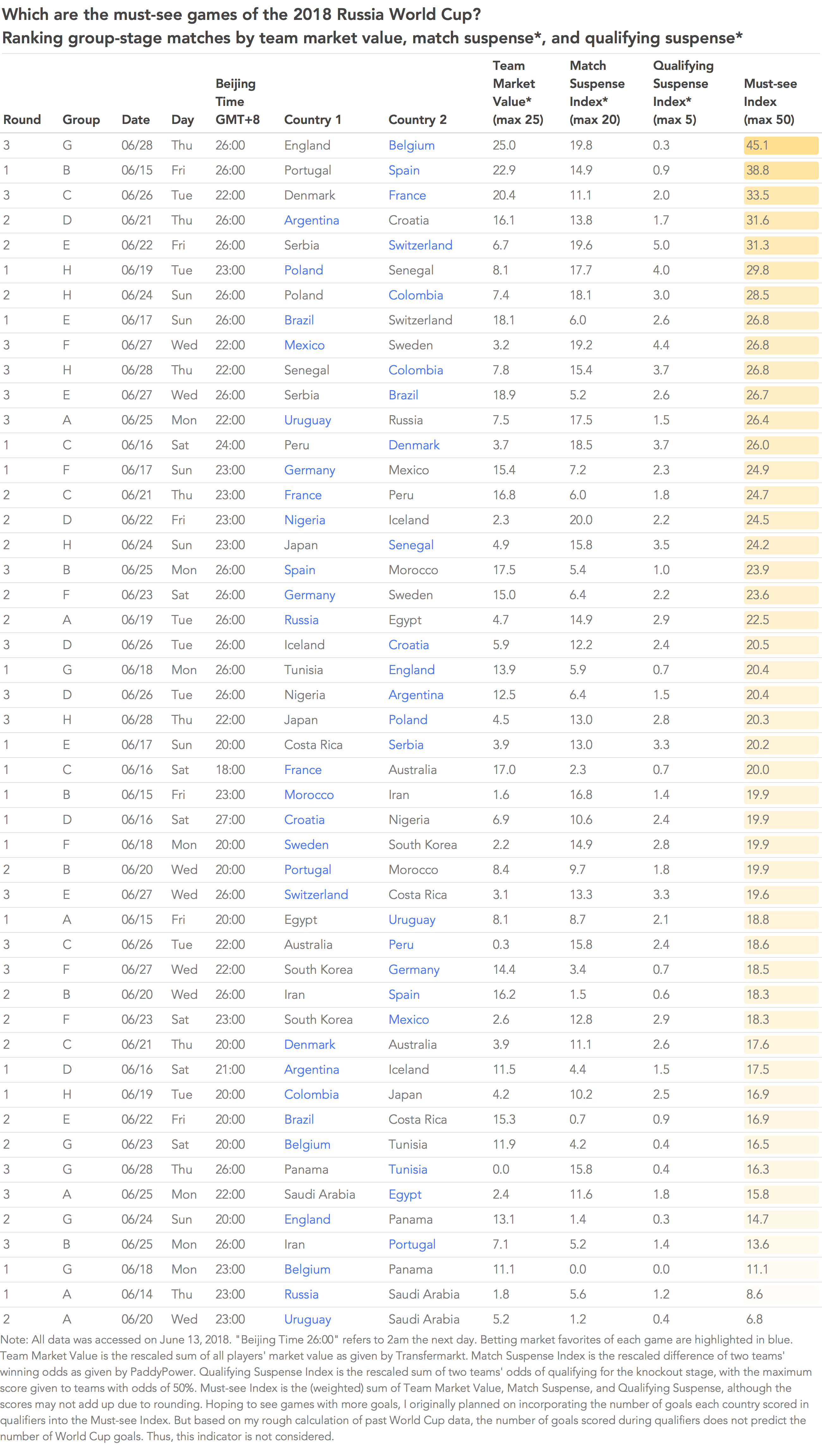 It it interesting that the World Cup’s opening game (Russia vs. Saudi Arabia) narrowly avoided becoming the least worth seeing!

I considered various ways to quantify preference #1 (i.e. player name recognition or team popularity), including the number of social media followers, Google search volume, etc. But the problem is that Instagram or Google data is easy to obtain for star players such as Messi but difficult or impossible to get when it comes to lesser known players.

Thus, I went to Transfermarkt, a German news site focused on football (soccer) player transfers. The site gives each player a market value, and although the number may not be accurate, it should be in the right ballpark. Thus, I take the aggregate team market value and rescale it so that the minimum score is 0 and the maximum 25. Below is the raw (i.e. unscaled) team market value for all 32 countries: 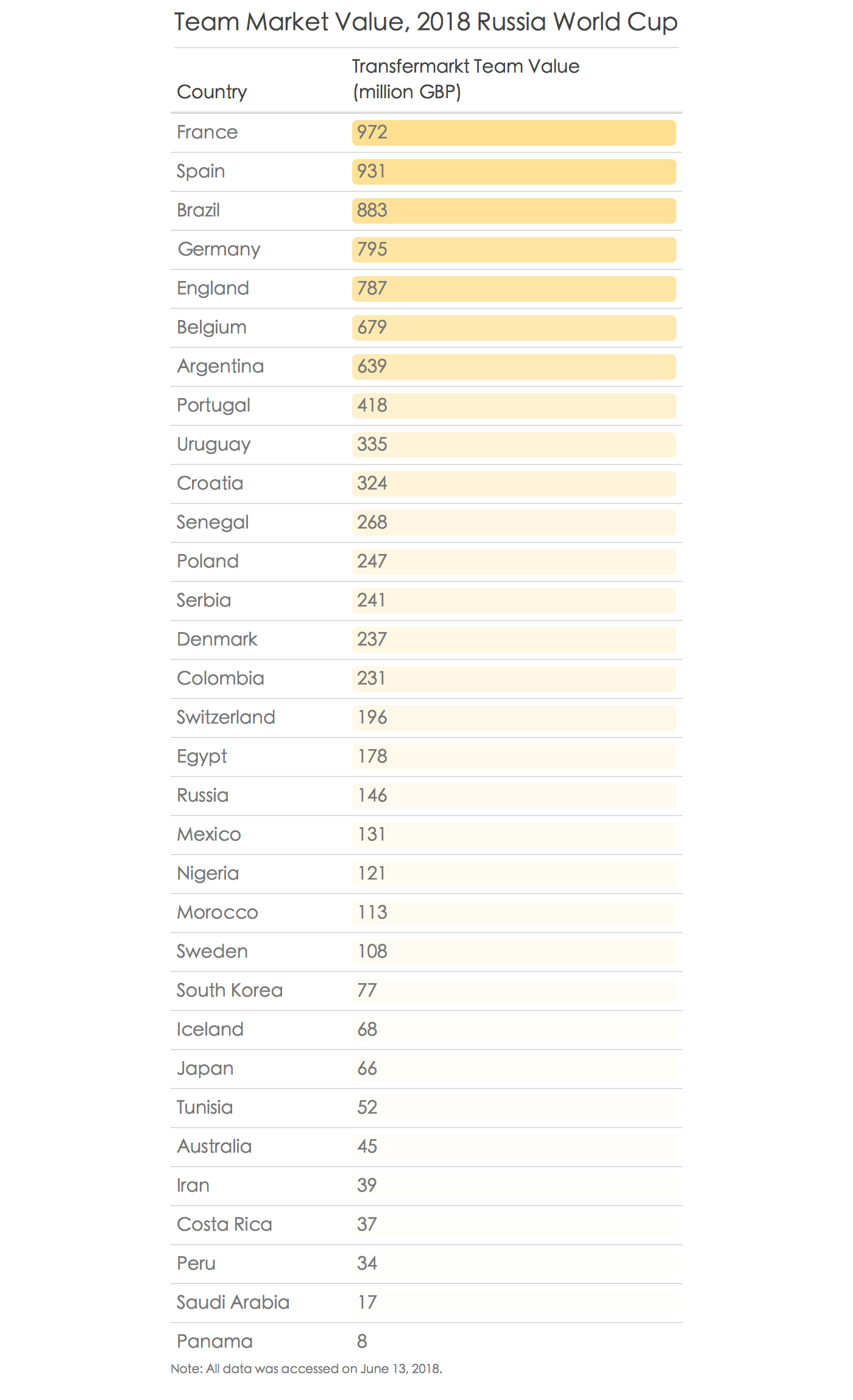 Below are the 20 most “suspenseful” games, i.e. games in which the two teams have the smallest difference in winning odds: 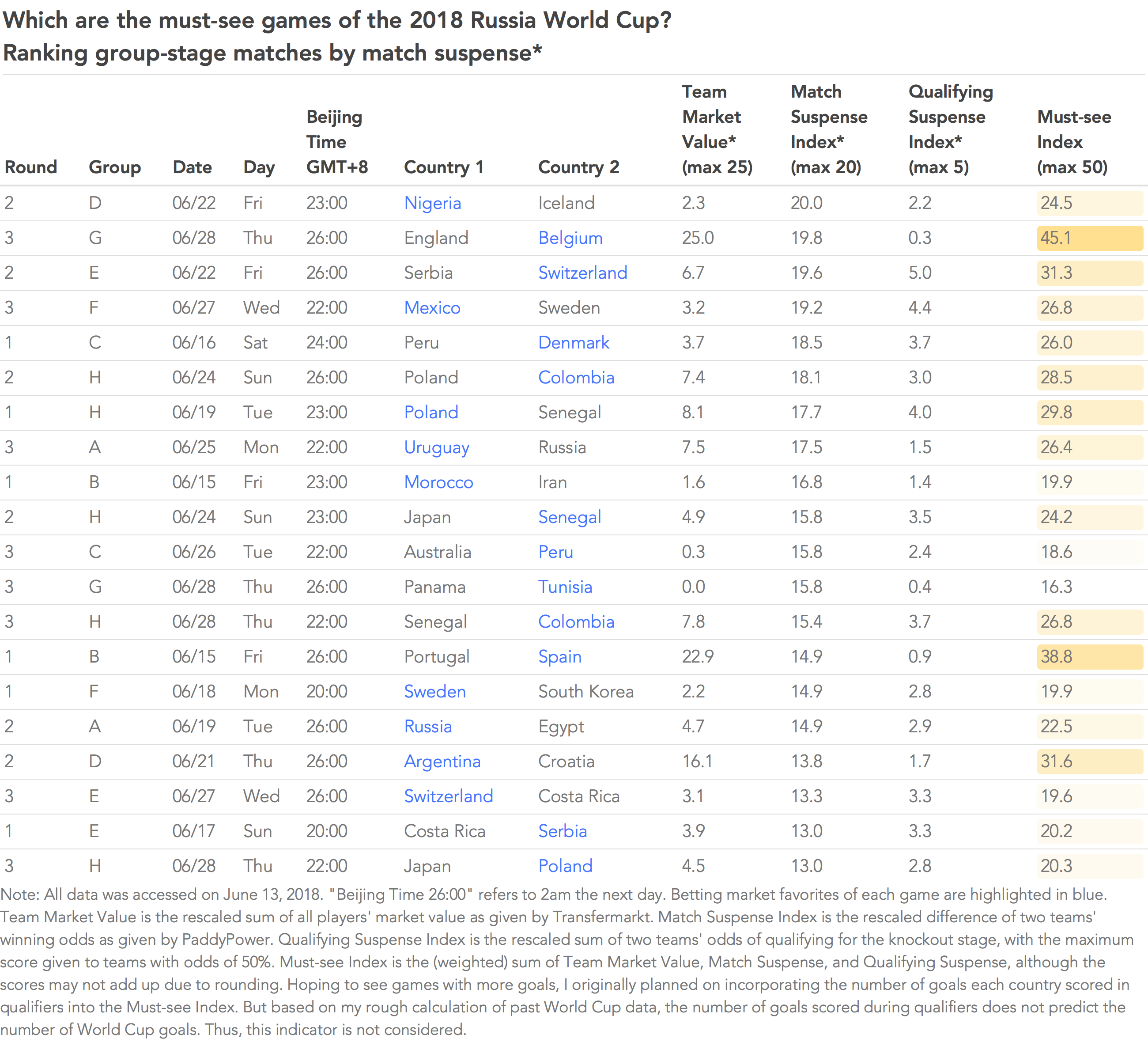 A match’s importance to the two participating teams and the amount of effort they will exert are dynamic. If a team won its first two group-stage matches and will rank first in the group regardless of how the third (and last) group-stage match turns out, then the third match matters very little to the team. Conversely, if the team did not win either of the first two matches, then the third is crucial if the team wants to advance to the knockout stage.

Unfortunately, a static ranking like the one I am sharing does not capture this dynamic idea of “game importance.” Thus, I have to approximate it by looking at each country’s betting market odds for advancing to the knockout stage: 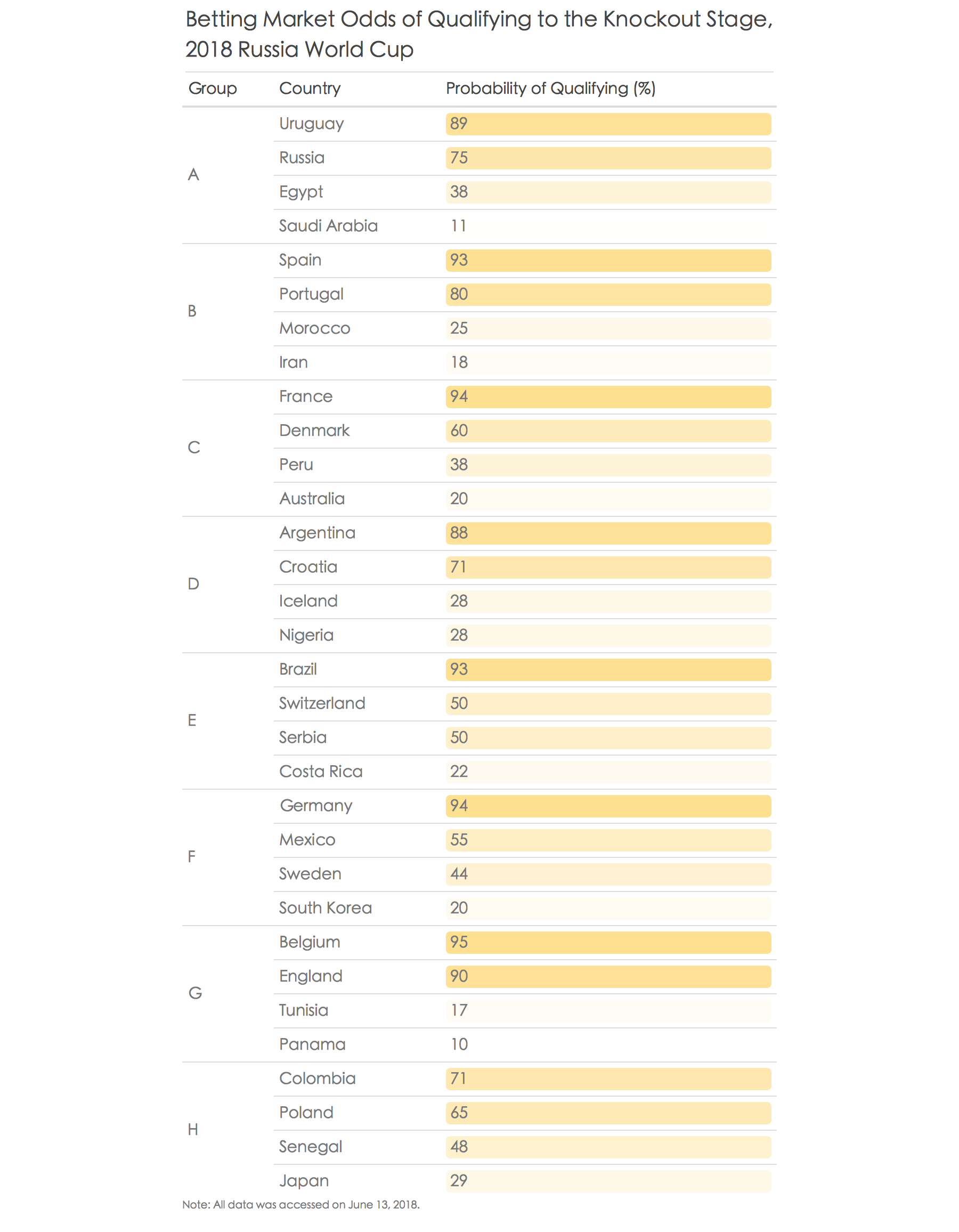 For most groups, it is already quite certain which two teams will advance to the knockout stage. The most “suspenseful” group is H, where Colombia, Poland, and Senegal all stand a good chance. In both groups E and F, two teams are vying for one qualifying spot.

Side note: As an Asian football fan, I am gravely disappointed that all Asian teams (including Australia, which plays FIFA qualifiers with Asia) are the least likely in their respective groups to advance to the knockout stage.

To capture the idea of “game importance,” I rescale each country’s odds of advancing such that a probability of 50% gets the maximum score of 5, and any smaller or greater probability gets a lower score.

Below are the games with the highest stakes (i.e. games involving teams that stand a chance at advancing to the knockout stages but do not have it in the bag yet): 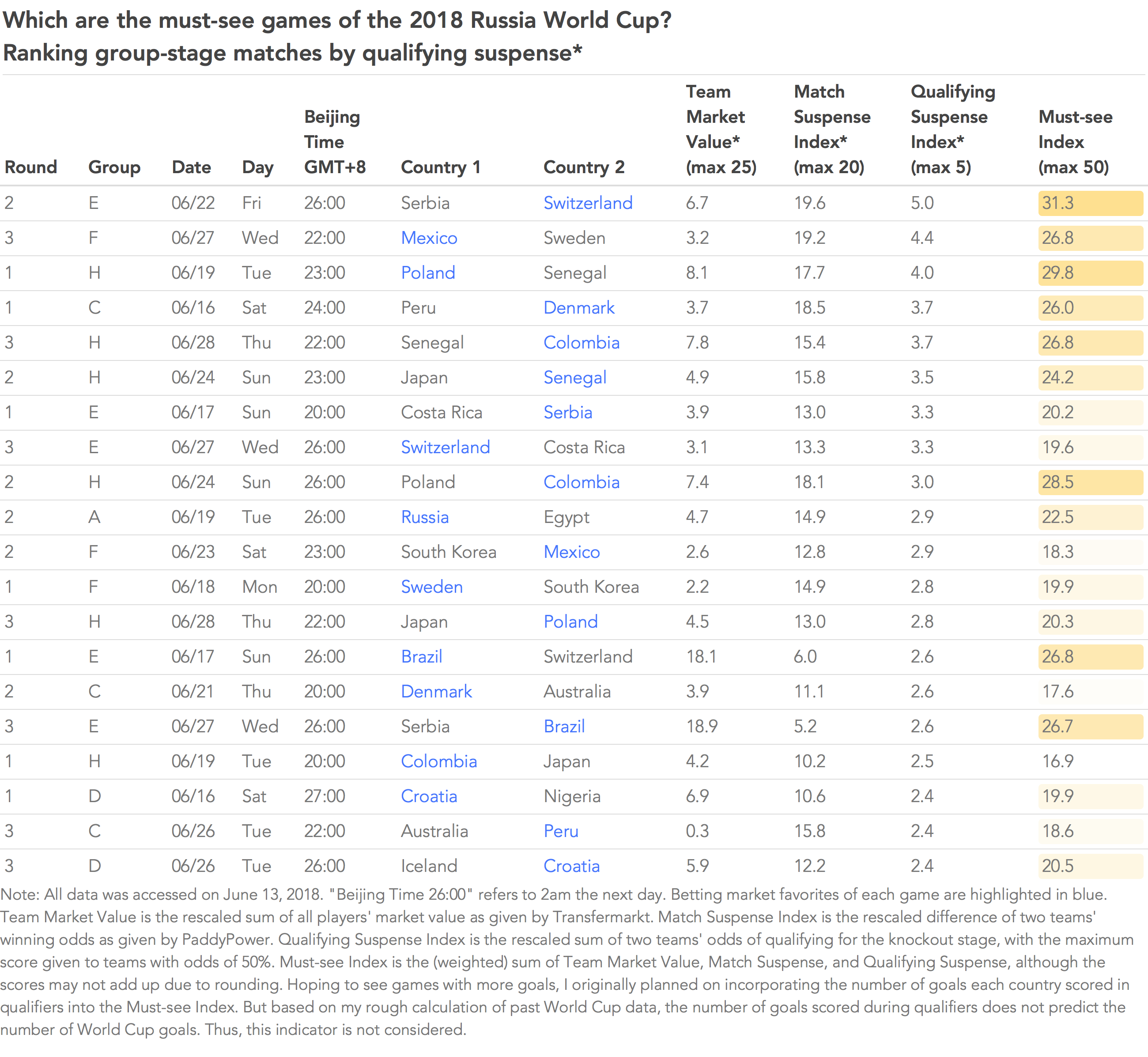 Thus, this preference is unfortunately not reflected in the ranking.

For those in timezones close to GMT+8 (e.g. Beijing, Hong Kong, Seoul, Tokyo, Singapore, Kuala Lumpur, Jakarta), I have also created another ranking, taking into account the kick-off time of each game, giving preference to games that start before midnight GMT+8 or fall on a weekend. Please see my Chinese blog for more information.

For reference, below is Must-See Index ranking again but sorted by date: 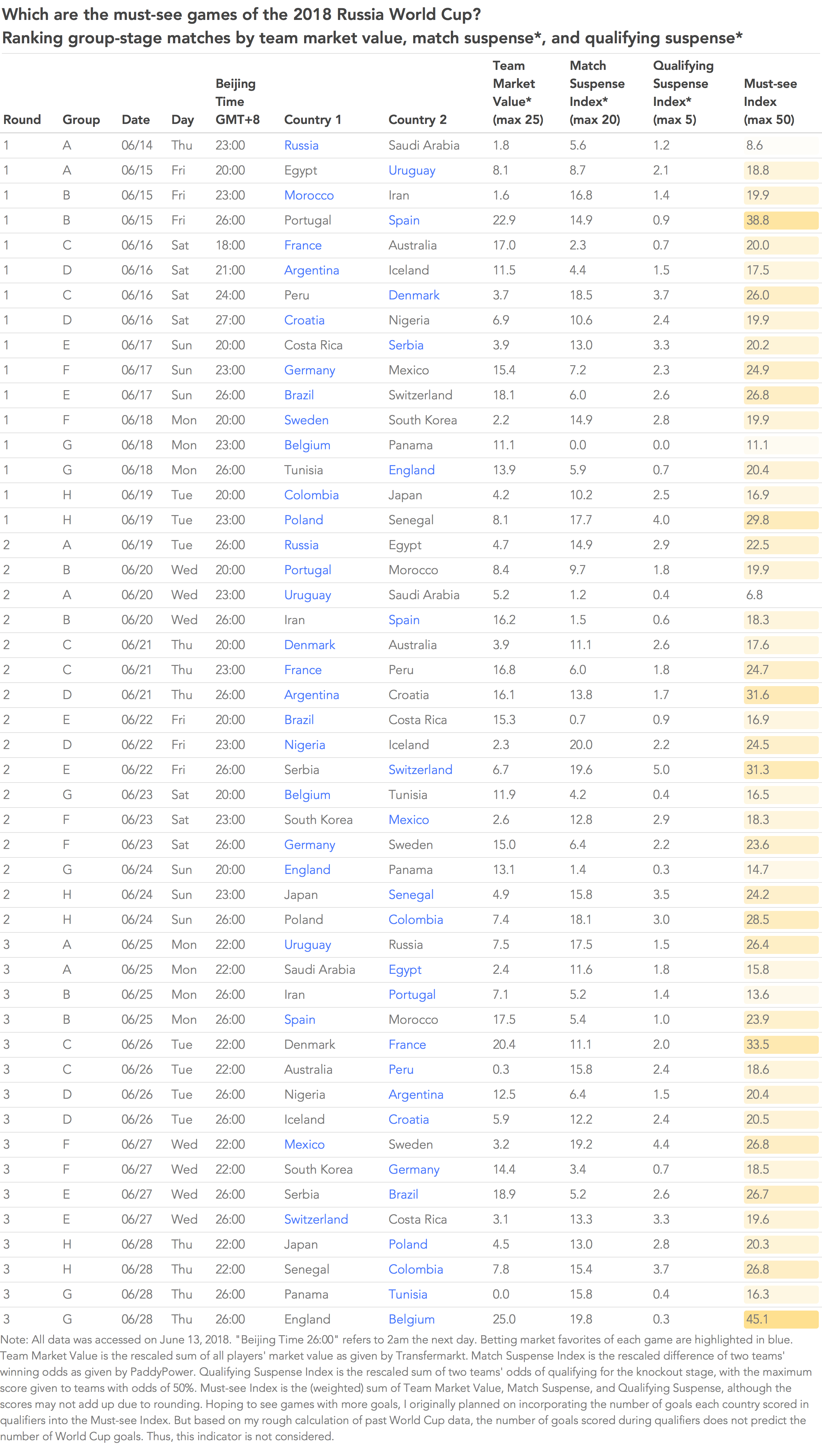